A Man and His Dog Were Dying Without Each Other. But When Nurses Broke The Rules A Miracle Happened!

Hospital nurses thought that 73-year-old James Wathen had reached the end of his road. He stopped eating, he could barely speak, and he was frail. But that all changed one day when he mustered up the strength to whisper to a nurse that he missed his dog. James hadn’t seen his one-eyed Chihuahua named Bubba since paramedics rushed him away from his home and into the hospital weeks before.

One sweet nurse, Kimberly Probus, told her fellow care-givers that, "One of our social workers realized it was mourning the loss of the dog that was making our patient even worse and emotionally unhealthy."

So a wonderful team of nurses got together to find James’ furry companion, Bubba. They all held on to the hope that this reunion would make their patient come alive again, and they were willing to bend the hospital rules to make it happen.

They successfully tracked Bubba down and found that he was taken to a shelter and placed with a caring foster family. But ever since Bubba was separated from James, he also became sick. 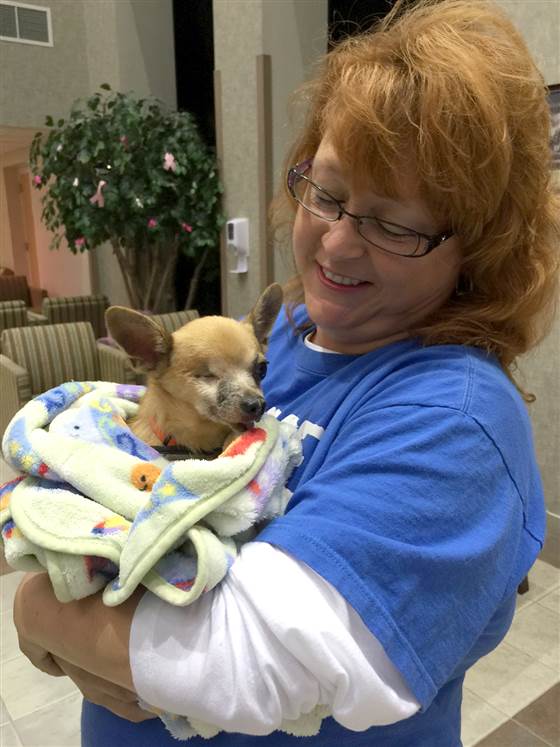 "The dog quit eating a week ago, which is very strange,” said the shelter’s president Mary-Ann Smyth. "The dog didn’t know where James was and James didn't know where the dog was, and believe it or not, they both stopped eating at about the same time."

The team of nurses and shelter workers worked hard and scheduled a very special visitor for James that weekend.

When they brought Bubba in, “He was so sad at first. We had him wrapped in a baby blanket and he was shivering,” Mary-Ann said. “The minute we got about 20 steps from this guy’s room — I kid you not — his little head went up. His eyes got real bright and he was like a different dog.” 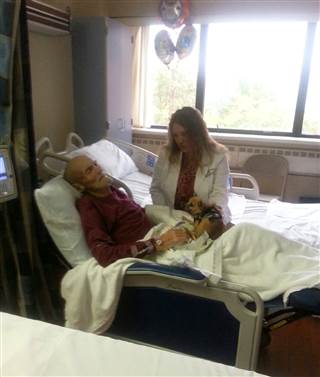 In their 30-minute visit James also became very bright, and he was a different man too.

At first, "They didn’t think James was going to make it," Mary-Ann remembered. “I was 10 feet from his bed and you could barely understand him because he was so hard to hear. The nurse had to lean up right against his face to hear what he was saying."

But with continued visits, both man and his-best friend have signed a new lease on life.

"He’s done a complete turnaround. He's speaking, he's sitting up, he’s eating. He doesn't look like the same guy," Mary –Ann said. "And the dog is eating and doing better now, too." 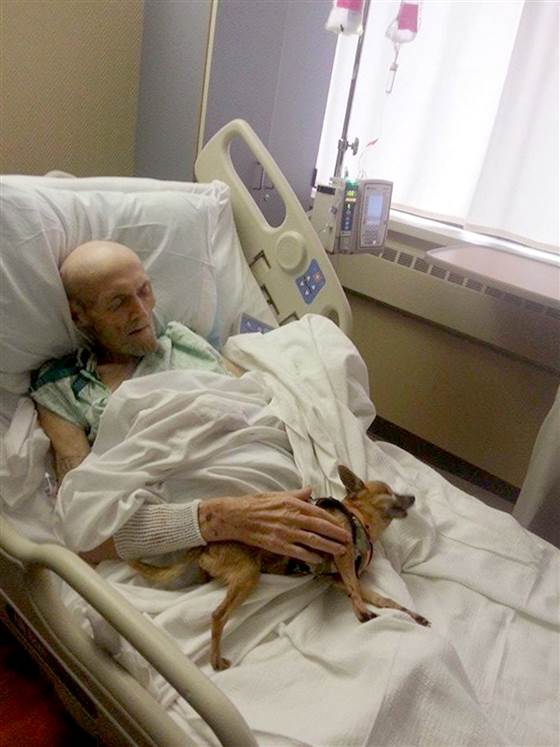 Mary-Ann is not surprised by how strong James and Bubba’s bond is, “I hope this story will show to people the tremendous difference that animals can make in people’s lives," she said.

Mary-Ann encourages us with this word of advice, “One of the biggest problems we face is the way some people think of animals. People just don’t see animals as creatures and beings, they see them as property. I hope people understand they’re not 'its,' they’re 'beings.'”

From James and Bubba’s story we can see that our friendships are more important than we can ever imagine. Your smiling face can bring life to a friend that’s feeling down. So never forget that you are an important part of someone’s life. Someone needs you today!

Check out James and Bubba's video: